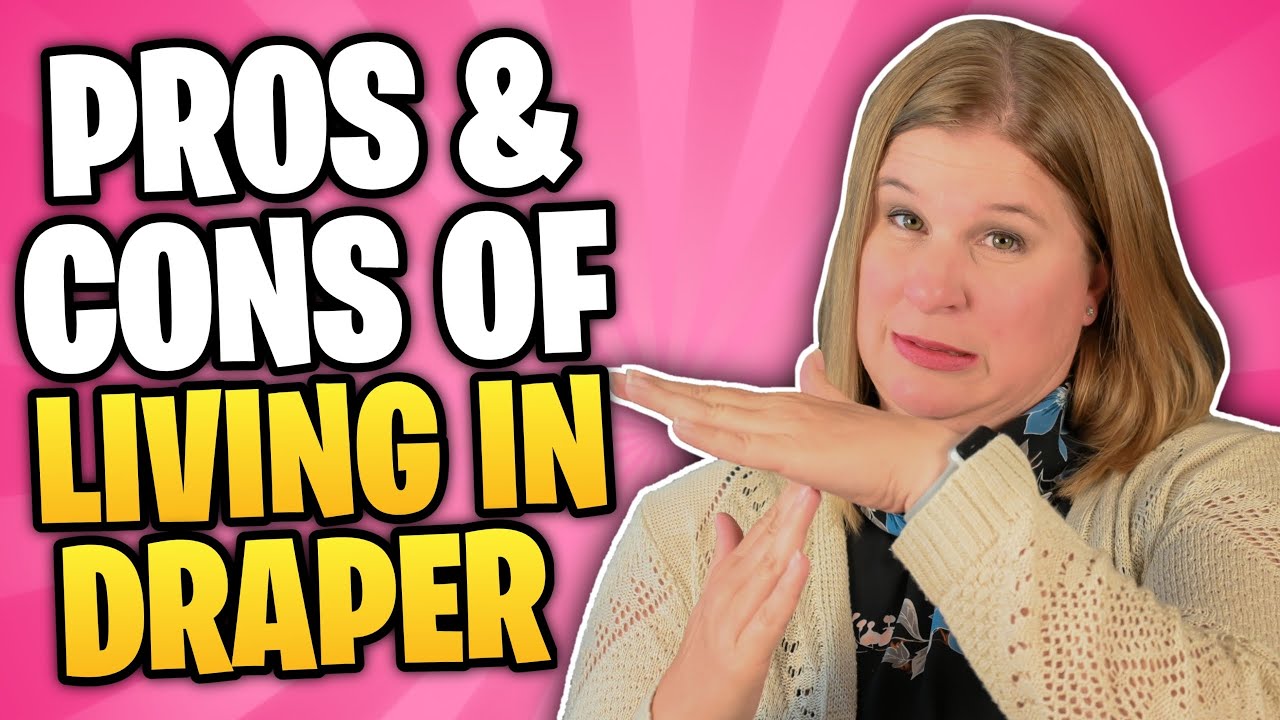 If you’ve thought about moving to Utah or researched places that would be good to live in Utah along the Wasatch Front, chances are Draper, Utah has come up on your radar. So let’s talk about the pros and cons of living in Draper, Utah.

Hi, this is Melissa Ballman and I am a Realtor with Berkshire Hathaway HomeServices and Utah Homes by Melissa. So what that means is I can help you buy and sell real estate in Utah. So if you’ve been thinking about moving here or you already live here and want to make a move, reach out to me, I’m always here to help. You can shoot me a text, send me an email, make a comment below. But we’re here today to talk about the pros and cons of living in Draper, Utah. And I actually moved to Draper, Utah back in 2002 when I moved from California to Utah. So I’m pretty familiar with Draper. I’ve lived, played, worked here for 18 years now. So let’s get into it.

Okay. So my number one pro of living in Draper, you might be wondering, what things are there to do in Draper, Utah? Well, we actually have a lot of things. If you’re an outdoors person, we have hundreds of miles of trails that you can take for hiking, mountain biking, just going for walks along the path. They do have paved roads that you can bike or walk on as well. So literally you could be gone for hours in Draper just exploring the outdoors on a bike or walking around.

Number three. Draper is convenient. We’re located about 20 to 25 miles South of Salt Lake International Airport and downtown Salt Lake city. We also have the Interstate 15 that runs right through town. And so commuting, even if you don’t work in Draper, but just live here, it makes it very nice and very convenient. Even if you’re the far east bench of Draper, your commute to get to the 15 freeway is probably only about three miles max. There are the silicone slopes all around Draper. Some tech companies are moving into Draper itself, so we have Adobe just a couple miles away, IM Flash, Tesla is right here in Draper. There’s so many companies coming into the area for silicone slopes that Draper is extremely convenient if you don’t want to commute far to work.

And speaking of commuting, if you prefer to do mass transit, we have two Trax stations in Draper and those go north and west of where we’re at. So they can take you up to the University of Utah, downtown Salt Lake City, Salt Lake International Airport, or you can even go west on the other side of town, but there are going to be, especially if you go west, there are going to be connections. If you have a longer commute, we have a rail system called FrontRunner and we have a stop right here in Draper. And that system goes about 90 miles from north in Ogden to south in Provo. So even if you decide Draper’s where you want to live but you have a little further of a commute, FrontRunner is a great option for that.

For convenience, Draper has a lot of things in the town itself, so you can go shopping, there’re schools here, lots of grocery stores, restaurants, we have the Living Planet Aquarium in Draper, trampoline parks, regular parks. So you can pretty much stay in Draper or within a couple miles of Draper and be able to diversify in the things that you’re doing and the stores that are available to you. And finally, if you’re a dog lover like me, I have two labs myself, we have Draper dog Park, and it’s a great dog park. I am there multiple times a week with my dogs and I always meet people that will come 20 and 30 minutes from other towns to the Draper Dog Park, because they either don’t have a dog park in their city, or it’s a really small dog park. So Draper Dog Park, it actually has a walking trail on the inside of it so you can walk around the perimeter, whether it’s just you or your pack comes with you, which usually happens, and it’s about a quarter mile per lap.

But otherwise the dogs have an obstacle course that they just put in there, a grassy area to run. There’s a stream that runs through it, it’s a decent sized dog park. We also have a restaurant now in Draper that is allowing dogs to dine on the patio.

So we covered the pros of living in Draper, Utah. Let’s talk about some of the cons. And honestly, I don’t have a lot of cons after living here for 18 years, but there are a few. The first one is, in July of 2020, I pulled the stats, the average sales price in Draper was $603,000. Now, there are homes, condos, townhouses, things like that, in Draper that are far less than the average. And we even have mansions in Draper that are far above that into the millions of dollars. So the average right now as of July 2020 is 603,000.

My next con is Draper is really growing and we have a plural site going in which is a huge commercial space. We have more and more businesses moving into the area and once the prison is relocated, which is in the works right now, to get out of Draper, that area where the prison sits now is actually going to become what they’re saying, like a miniature downtown Draper. So we need better infrastructure to support the traffic that is coming in, whether it’s from businesses, or we have a lot of large apartment complexes that were just currently built or in the process of being built right now, which is going to bring even more people into the city.

And my last con for living in Draper and this is a big one for me, is the code enforcement in Draper. There’s no other way to say it. It just sucks. They seem to not care as much as other cities in the Salt Lake Valley about code enforcement and maintaining that curb appeal in neighborhoods. It’s not unusual to drive around Draper and see people that leave their boats on trailers or just trailers parked on the street for weeks and weeks or months on end. Now, it is against Draper codes to do that, but they do not enforce it. And so that’s my biggest pet peeve, is the code enforcement and just maintaining the beauty of the city and the houses around. Now, there are some fantastic neighborhoods, especially if they’re in an HOA that doesn’t happen. But you can see in this video, there are some neighborhoods that they just look terrible and they’re very inconvenient to drive down the streets when you have so many trailers and things in the road.

If you liked this video, make sure you check out my other videos about living in Utah and things to expect. If you’re thinking about moving to Utah or you live in Utah and you want to make a move, reach out to me. I would love to connect with you. As always, make it a great day.

2 responses to “Pros and Cons of Living in Draper Utah”